In the first in our series on the future of print, Tony Beresford, marking a milestone decade as head of creative consultancy at scarlettabbott, reflects on how much has changed in the creative landscape – and what’s on the horizon. 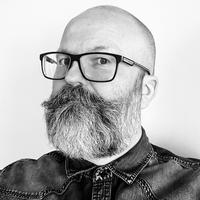 Remember the original 1984 film Ghostbusters? My colleagues will tell you I’m a superfan. The late, great Harold Ramis plays the character of Egon Spengler and coined the line “Print is dead” as no one else could.

And although I’ve been hearing about its death since 1984, print is still looming large today.

While technology has advanced in leaps and bounds in the last 10 years, and how we consume information is ever-changing, the fundamental questions for communicators – and the graphic designers that help deliver our key messages – remain the same: how do we make our communications stand out? How do we get our readers to want to read those pieces? How do we make sure that they land?

Cast your mind back to 2012 when the humble employee magazine was still the key platform in the IC arsenal. Certainly, it’s what I was known for creatively at the time. My knowledge and expertise in the magazine and print-based design field led me from my previous agency to head up the creative consultancy at scarlettabbott.

I’ve always been preoccupied by trends. By nature, design evolution is influenced by zeitgeist, culture and marketing. What’s seen to be working in external comms generally tends to trickle down to internal comms, eventually.

And the last decade has brought plenty of change with it. Many have once again shouted “print is dead” and, during the pandemic, we heard that even louder. But today, orderbooks at print production companies beg to differ. It’s not always that we’re using print less, it’s just that we’re thinking about it more strategically. It has become one of many arrows in the quiver of the IC professional, rather than the one thing to rely on.

As I reach my milestone anniversary of 10 years with scarlettabbott, I've been reflecting about the changes I’ve seen over the years, and what they might predict about the road ahead.

A mosaic of multimedia

Print isn’t dead, but it’s now taking its fair share in a suite of tools that can split your content across print, podcast, video, social, emails and more. It’s another area where  internal communicators have taken their lead from what works externally. It’s about recognising that your audience consumes your content in a variety of ways.

Some prefer print or may not have access to digital. Some will only ever consume what’s on their phone. Some get their news and updates exclusively from feeds like Twitter. Some haven’t got the patience to read your carefully typeset magazine feature, but will gladly listen to a podcast.

One size no longer fits all and some of us – ahem! – have to recognise that today’s 22-year-olds were born in 2000 (gulp!). They’ve only ever known the digital landscape we now live in. The future of our industry will become more focused on digital channels in the next five years, evolving rapidly and in unexpected ways.

We still see a lot of desktop-based digital experiences, with mobile playing second fiddle. But as colleagues begin to use their personal devices in the workplace, we’ll likely see a shift to “mobile first” as the next generation enters the workforce – allowing us to turn to the small screen and make the most of the intimacy of the platform.

Graphic design will still play its part, but it will have to work harder to be seen and remembered.

Looking for more sustainable options is rightly high on everyone’s agenda and is one of the drivers in a lot of brands turning off their print channels. But consider this: cardboard, mixed paper and newspapers remain among the world’s most widely recycled and recyclable materials. Pit that against the old mobiles, computers, tablets and the mountain of single-use plastic AC chargers that end up in landfill, not to mention the daily energy used to power these devices and the gases given off in their manufacture… I do wonder if we might start to see a backlash against tech.

Yes, the next generation will put mobile experiences first. But that same generation are also increasingly worried about the planet they’re inheriting.

But maybe some of “the old ways” still have a part to play. Print might make a return as a source for articles and features that need to be consumed at a slower pace; a place where long-form journalism can breathe, and photos and illustrations showing off the immensity and impact of a latest project can shine through.

Print as a must-have keep-sake

So, I still subscribe to a magazine. Yes, I do.

It arrives quarterly and I relish it landing on my doormat. It’s called Delayed Gratification, produced by The Slow Journalism Company. It contains no advertising, and it looks and smells AMAZING.

The graphic design obviously plays a bit part in my love of this publication, but the main attraction is the journalism. What DG promised to do from the start was wait for the news. In a world where even the BBC clambers over itself to break the news with little or no meat on the bones of the story, DG reports on what’s happened, and how it unfolded rather than what’s happening in the moment.

I’m sure this is something internal communicators can relate to – our news is often old before it sees the light of day. But it doesn’t mean the story of what actually happened can’t be an interesting read.

It’s slow, reflective news that’s perfect for print – something I can consume and enjoy in a moment of my choosing. After an initial flick through its pages, I’ll return to it multiple times to pick at the articles I want to read. That’s something print can do way better than anything digital: lure you back with its physical presence. It can sit on your desk or in your bag and invite you in. Sometimes, it can even guilt you into reading it. An arresting headline, intro and image can have real impact; they stay with you and make you want to return.

The closest I’ve seen digital get to this, is the little red notifications dot on my iPhone. This small, often distracting dot draws me to a certain app and pulls me in while I see what is new that has caused the dot to appear. Though a few taps and swipes and I can make the dot go away. Bye-bye guilt and intrigue.

In our second article on the future of print, read about TfL communication manager Jan Fitzgerald's research on the use of print in internal comms.

Creating content and conversation Change and Transformation
Return to listing

Print might make a return as a source for articles and features that need to be consumed at a slower pace... where photos and illustrations showing off the immensity and impact of a latest project can shine through.

Joining forces: communicating through a merger or acqusition

A merger or acquisition is no cakewalk for internal communicators. It’s a hard slog over many months of uncertainty, stress and mystery – and then you have to support colleagues when the news breaks and bring two workforces together. Collaboration and listening is key to making sure all goes smoothly up to day zero – and beyond.

The IoIC Guidance to Ethical Practice

In this webinar, our panel discussed the IoIC Guidance to Ethical Practice, which has been created to further support the professional standards of internal communication by focussing on our ethical practice, setting out the principles and giving advice for making ethical decisions.

How to restructure your internal communication to promote collaboration

Communication is the key to success in any relationship, and business relationships are by no means different. However, communicating effectively in the workplace is not always easy. This is true for both small enterprises and large corporations alike.

It's day two of the Festival, here amid the lush green fields of Papplewick, Nottingham. Yesterday's opening day was a great success, with lots of insightful discussion, guidance and ideas around artificial intelligence, gamification, agile thinking, writing from the heart and more. And it concluded with a blue sky and sunset that was hard to beat. Papplewick in Nottingham really had it all yesterday.

Here we are, back at the stunning Goosedale in Nottingham, for our second IoIC Festival. It's our own Glastonbury with legends of IC performing across all our zones – presenting, facilitating discussion, networking and bringing out great ideas, messages and solutions.

In black and white: proof that print is alive

In the second in our series on the future of print, communications manager at TfL Jan Fitzgerald has conducted research on the use of print in internal comms and found print very much continues to hold its own in the era of digital.